A new mix from Jed... "In between the acid tests of the 1960's and raves of the 1990's there was Studio 54 and disco music in the 1970's. Located at 254 West 54th Street in Manhattan, Studio 54 opened its doors in April 1977. 'Studio,' as it came to be called, was notorious for the hedonism that occurred within it - the balconies were known for sexual encounters, and drug use was rampant. Its dance floor was decorated with a depiction of a Man in the Moon that included an animated cocaine spoon. Studio 54 was the place where music, different kinds of people, and extravaganza blended into a dream-like fairy tale. There was body paint, people dressed in drag. Bianca Jagger once entered mounted atop a white horse. Celebrities abounded - Andy Warhol, Truman Capote, Liza Minelli, Elizabeth Taylor, Mick Jagger, Keith Richards, Michael Jackson, Cher, Al Pacino, Pele, and Mohammad Ali. Of course, all of this may not have happened if it was not for disco which was arguably the soundtrack of the mid-1970's. This mix celebrates the hedonistic spirit and fabulous music of Studio 54"... June 2010. 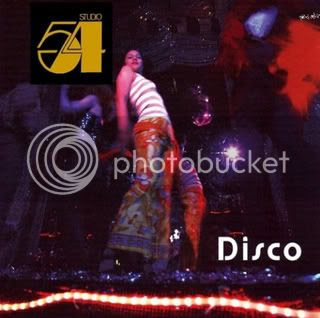 
(if player is not working please try refreshing the page)
Posted by Meg at 12:32 AM